Blimey! Locust Grove certainly knows how to have a good time. I hereby declare this past weekend’s 18th Century Market Fair to be a rousing success, judging from all the smiling faces and the sheer number of cars parked in the field. From the antics of the Amazing Budabi Brothers to the military engagements between British and American forces to the savory smells from His Lordship’s Beef, there was plenty to see and do and buy and taste! Here are a few stories and characters I encountered as I journeyed through space and time to Charleston, South Carolina in 1780. 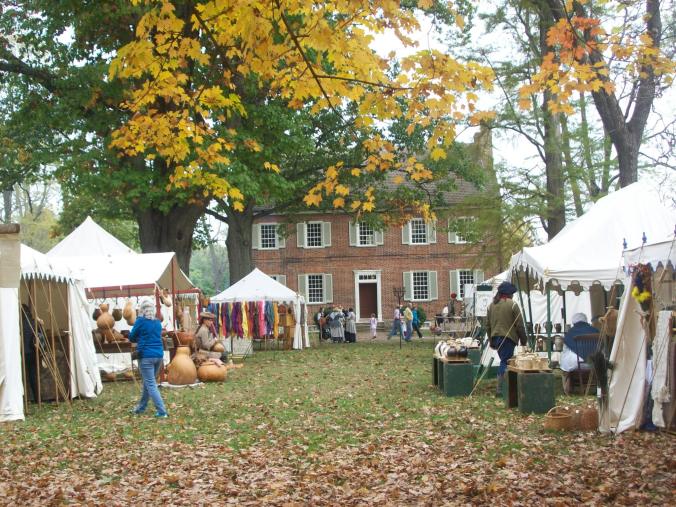 Kevin and Barbara were two of the first people I met at Market Fair this year.  In 21st century life, Kevin is the city manager for Bowling Green, Kentucky, and he and Barbara have been reenacting since 1990. They also chose to celebrate their 36th wedding anniversary with us this weekend. Congratulations, Kevin and Barbara! 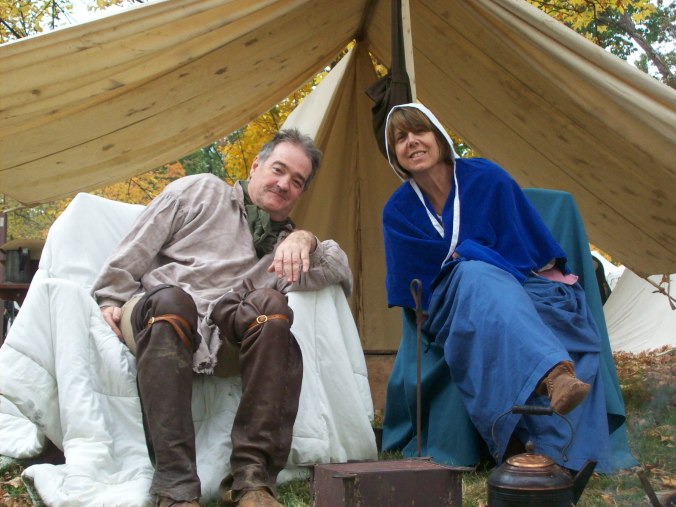 For many, reenacting is a family affair. Young Benjamin and his parents portray British subjects moving from Virginia to Kentucky, and as you can see, Benjamin is very happy to be living in the 18th and 21st centuries! 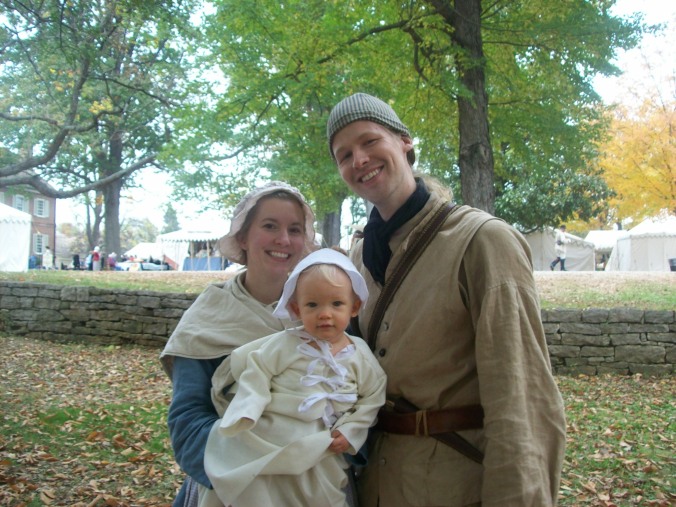 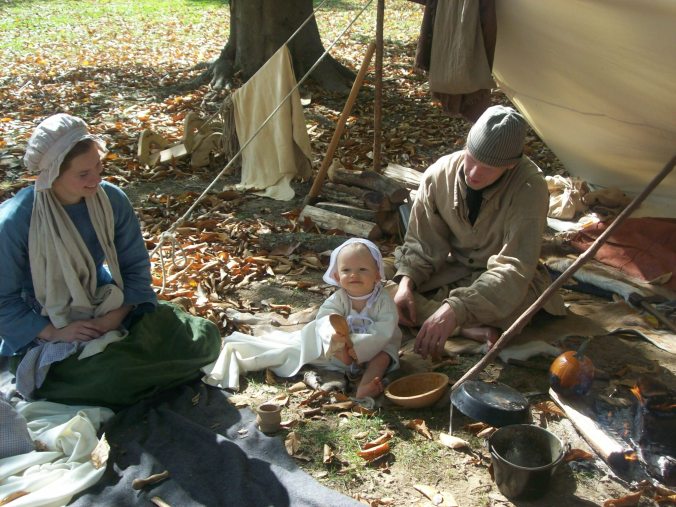 I discovered that like Benjamin, many reenactors were born into the hobby. Jen and Elizabeth, both from Chicago, along with Dobie the dog, were celebrating the 40th anniversary of the Northwest Territory Alliance or NWTA, a midwestern reenactment organization. Elizabeth’s father was originally from Britain, and founded the NWTA as part of the process for his naturalization, so her participation is part of her blood. Jen calls reenacting “tough but worth it” and thinks of events like Market Fair as a sort of family reunion. Locust Grove is lucky to be a part of such a big and loyal family of reenactors! 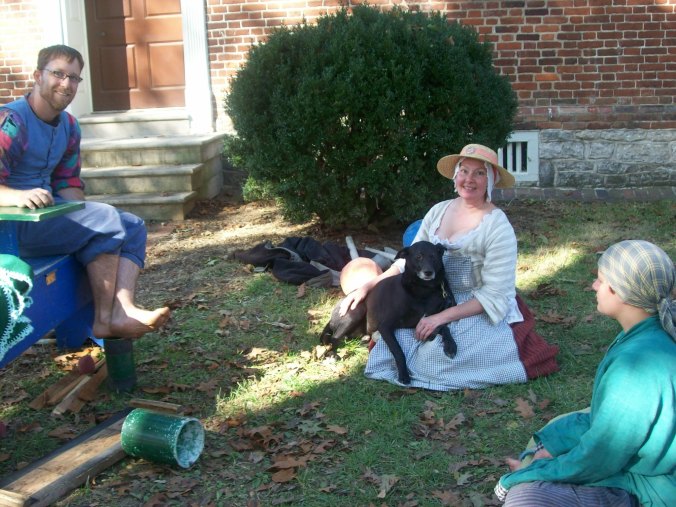 Nick, on the left above, and his brother Erik, are the Amazing Budabi Brothers, and they  have been entertaining fairgoers at Locust Grove for seven years. Their performances in front of the house drew big crowds and gales of laughter, so we certainly hope they’ll return next year! 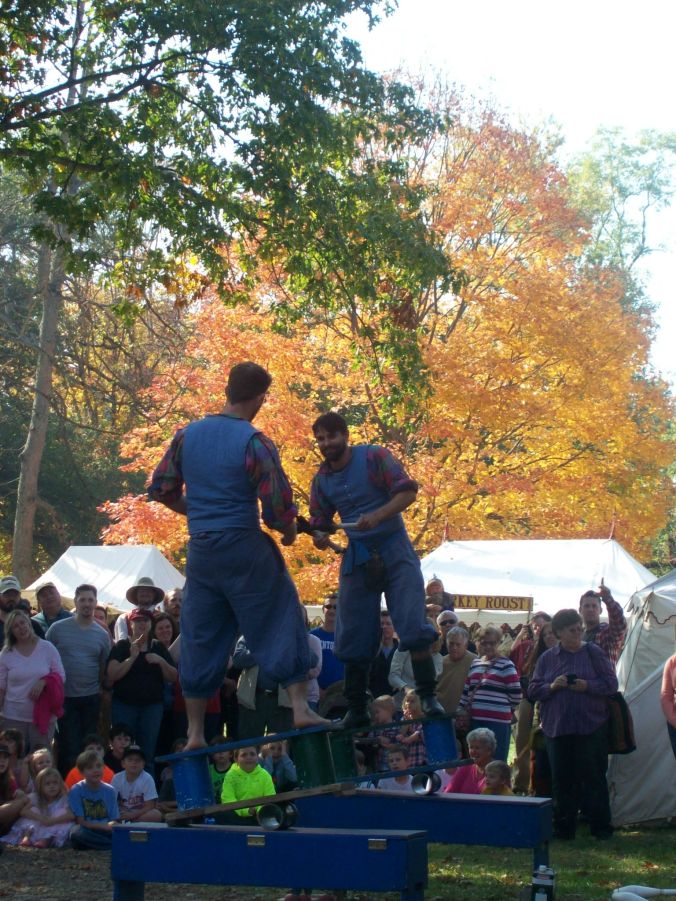 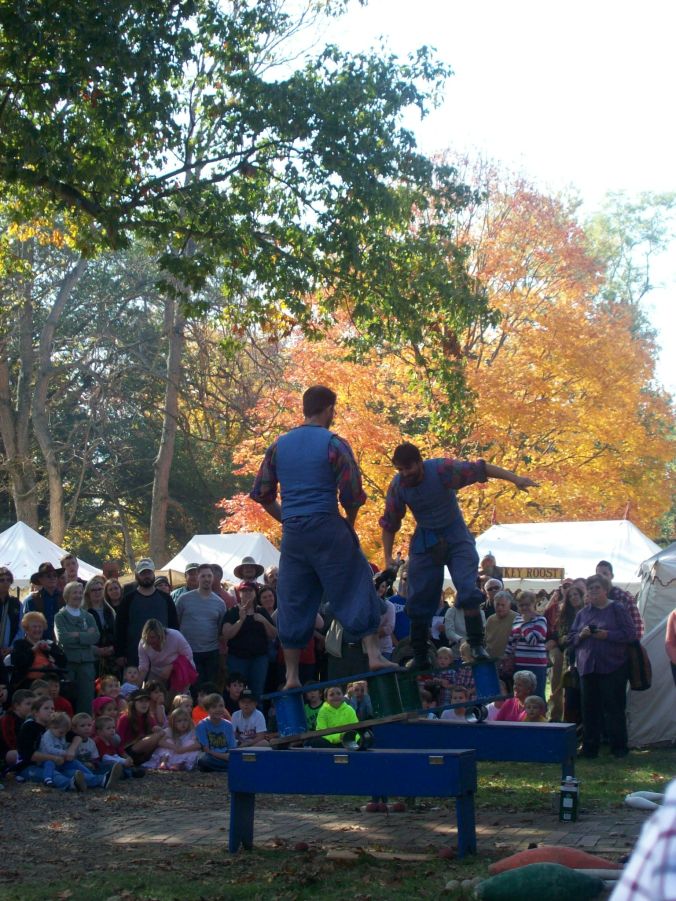 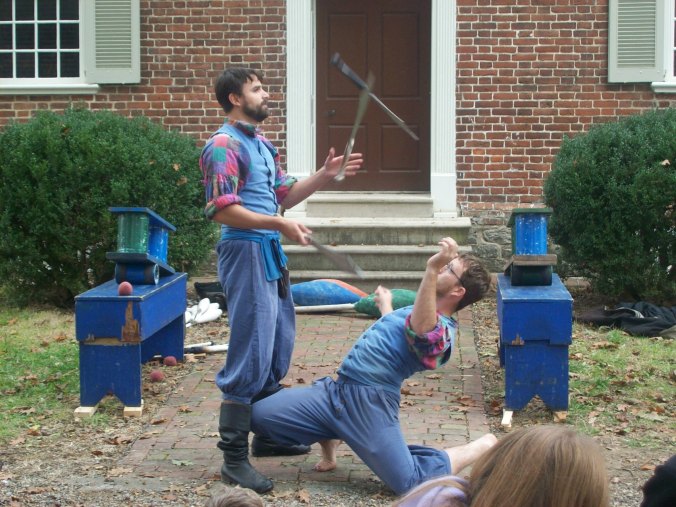 Keeping the grounds free of vermin was Silas Moore, Rat Catcher. This year he caught 23 rats, but his record is 25. He gets one penny for every rat that he catches, and as a bonus, all the ale he can drink. Rat catching is an excellent business, as he not only gets paid, but can also make dinner from what he catches. He helpfully provided me with a recipe for rat stew, but I have a feeling he’s grown fonder than he’d like to admit of his rat Wilson. 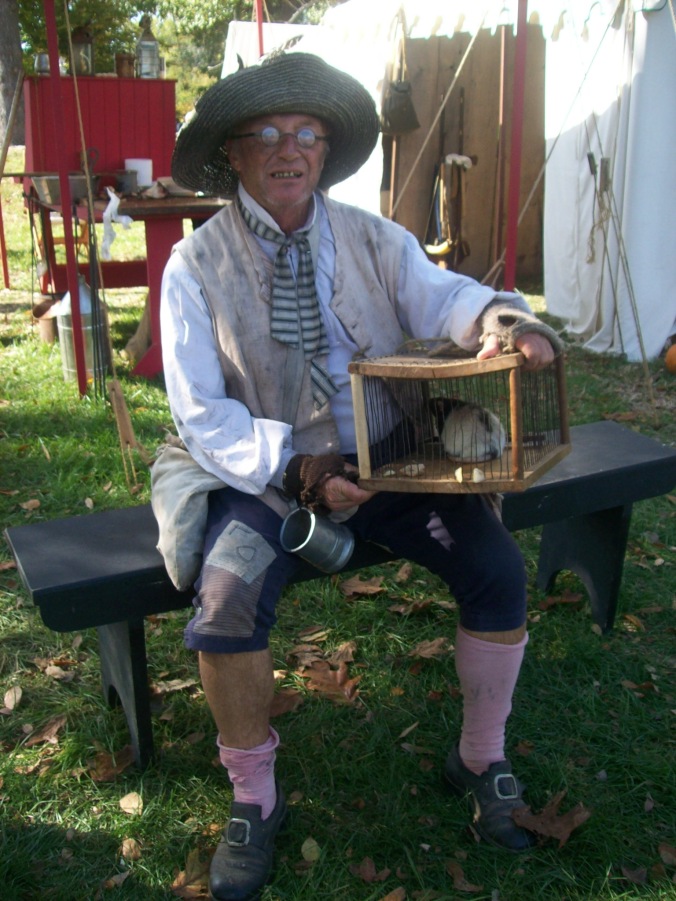 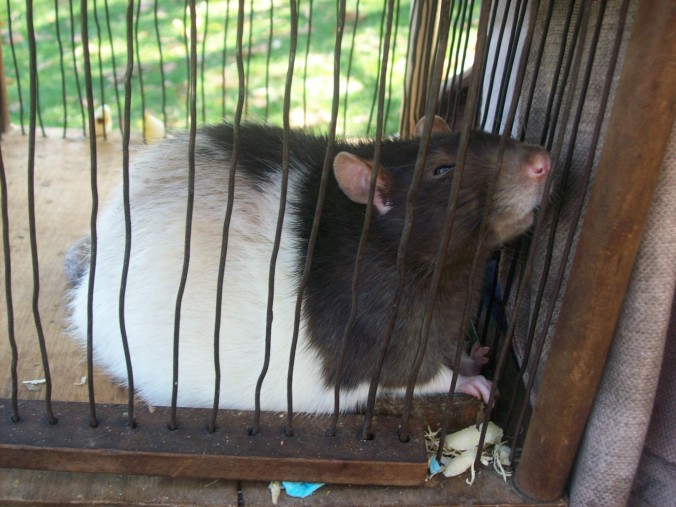 Thomas Adams, a brewer from Philadelphia, and his wife Grace traveled to Charleston in support of the British, and gave me insight into life in the British camp. 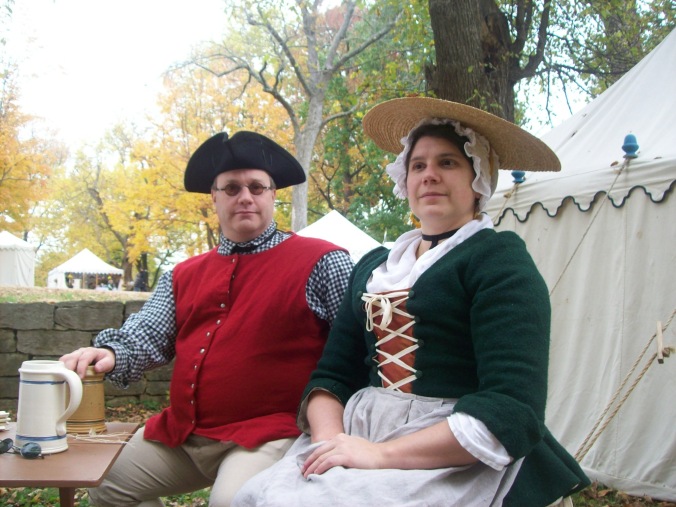 This kind lady let me pet her rabbit, named Supper. 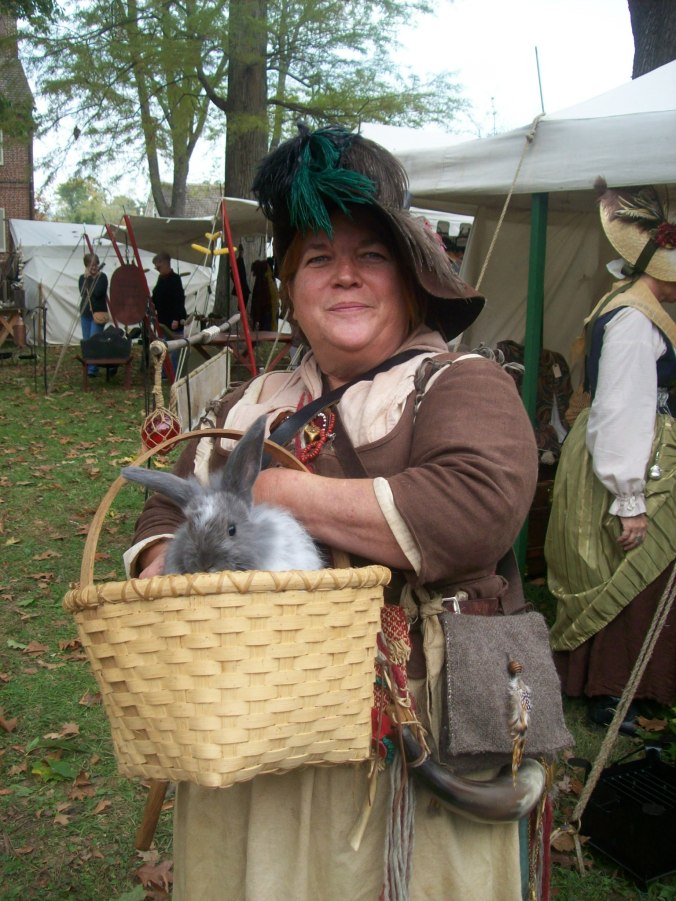 I also had the chance to do some shopping for the dairy! J. Henderson provided us with two pancheons last year, and I fell in love with the blue and white design of these pitchers and batter bowls. Aren’t they pretty? 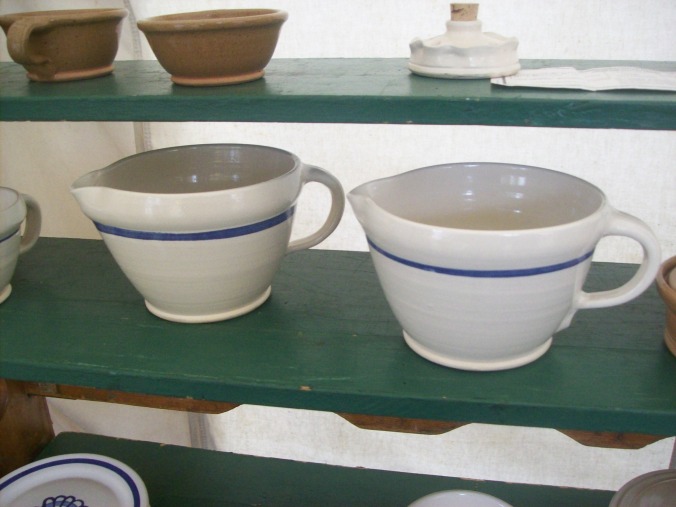 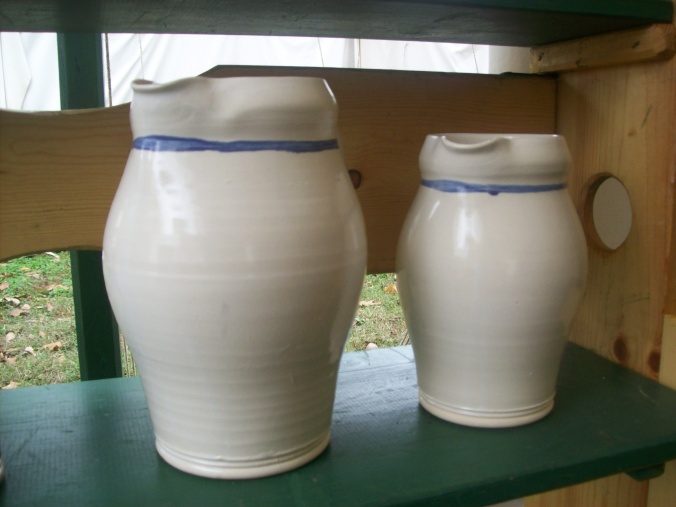 Speaking of the dairy, we now have a cow! Her name is Nancy Gaston, after LaMar Gaston, a Locust Grove volunteer and former Board member, who has been one of my partners in crime in furnishing the dairy. I think she adds an authentic, rustic presence to the dairy, don’t you? 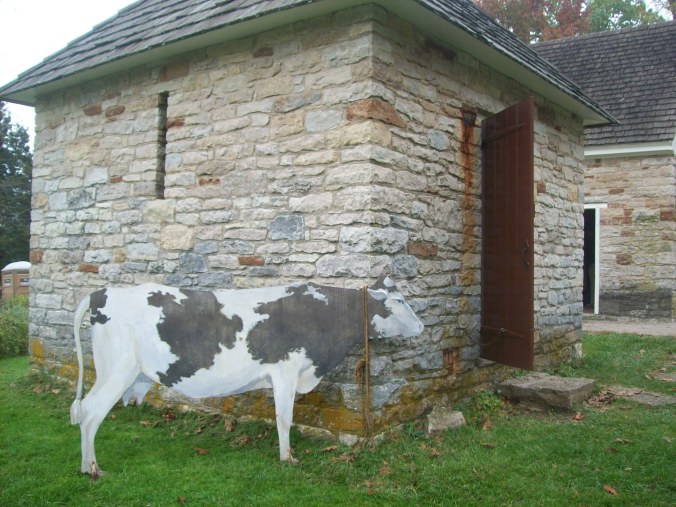 Perry Riley, of Elysium Ver Sacrum, is a gourd artists and reenactor from Danville, IL. In his 18th century persona, he portrays a white man who was captured by and adopted into a Native tribe, and feels caught between two worlds. In his 21st century life, Perry works for Pepsi-Co, and also creates gourd art. Gourds have been used by humans since 11,000 BC, and were the “Tupperware of the Old World”.  He also  volunteers much of his time as an art therapist at the VA Hospital in Danville. He works to keep the tradition of the “Spirit of ’76” alive by adopting deployed U.S. soldiers and sending them care packages. If you’d like to contribute to his endeavors, you can find him on Facebook! 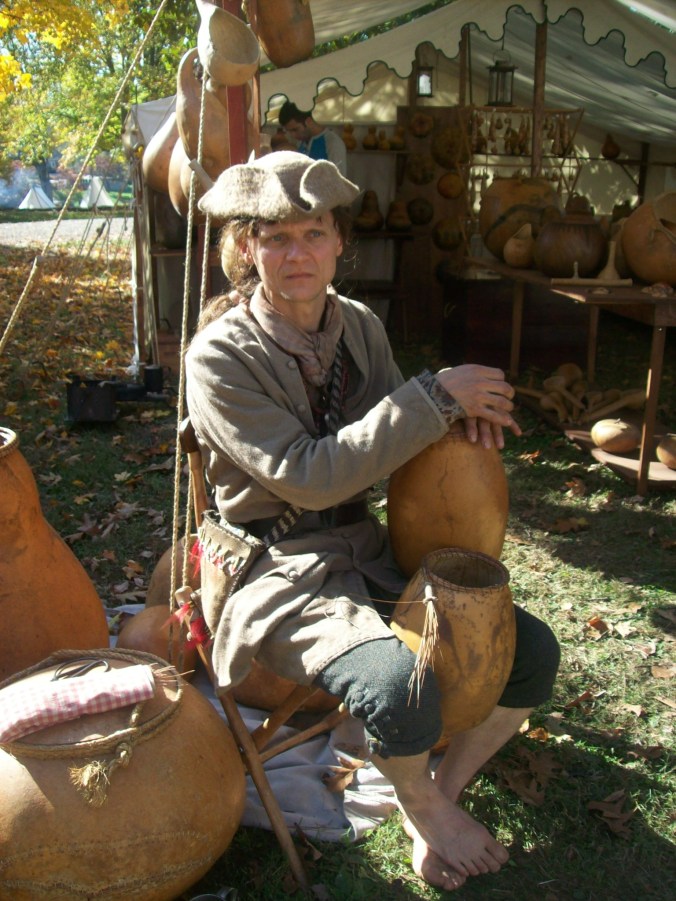 A big shout-out to our program manager, Brian Cushing, for all the hard work he put into this year’s Market Fair! 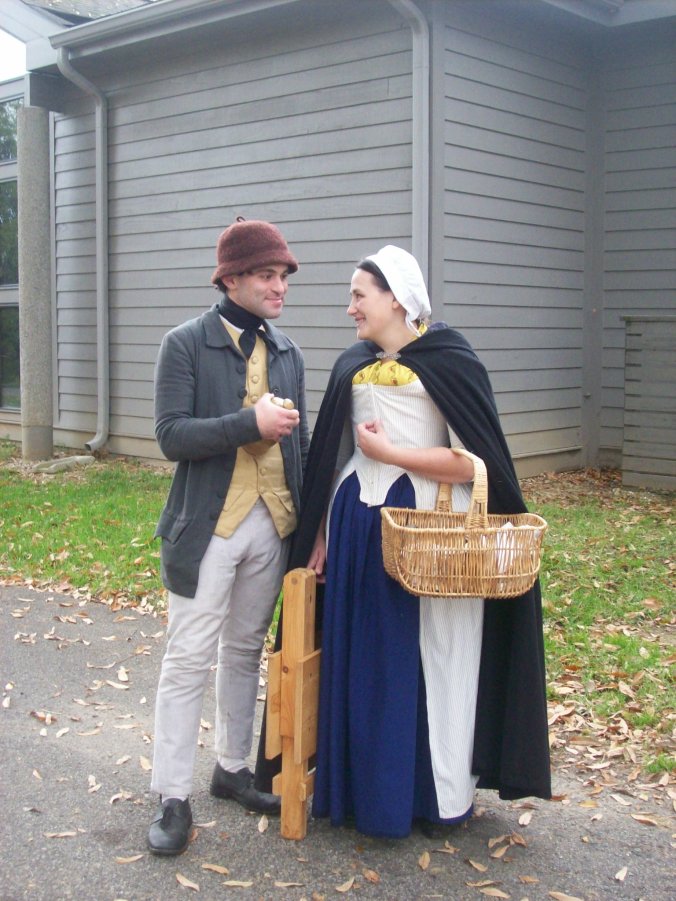 Our own Lynn Lamb, Weekend Manager, took some time to play as a member of the American militia! 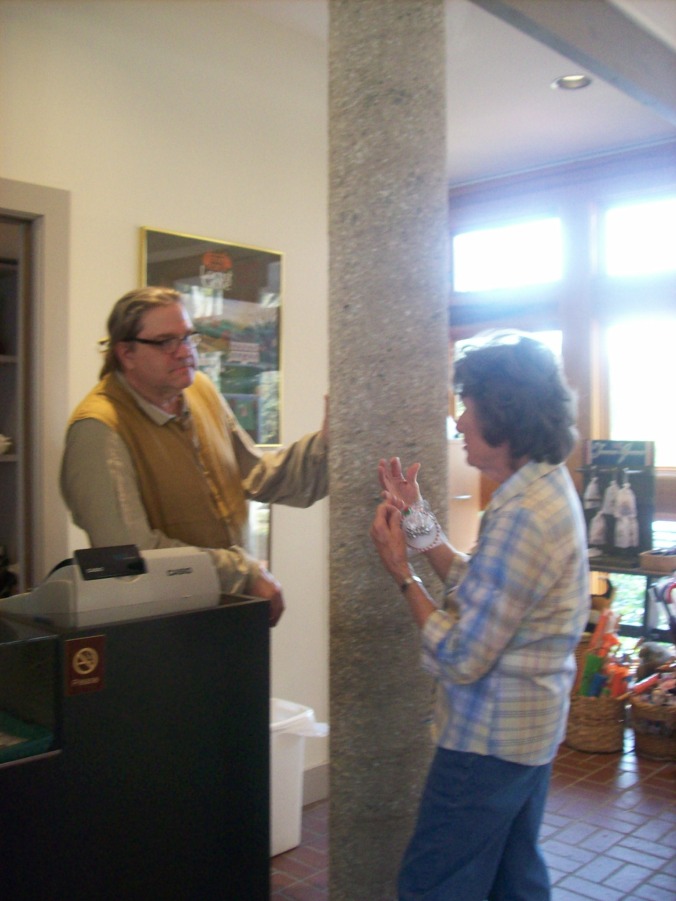 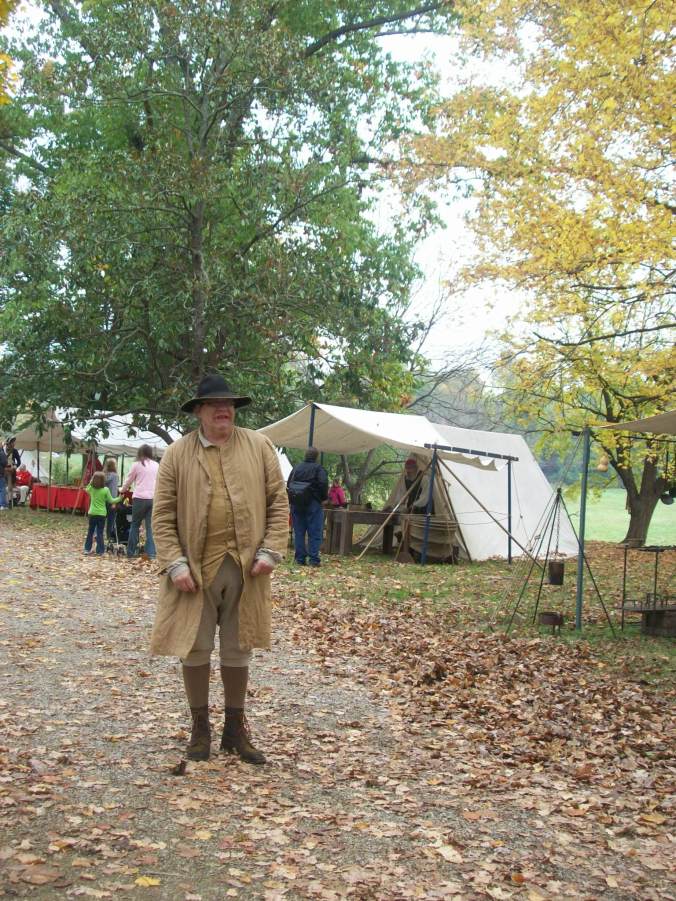 Our family of volunteers, the Hiners, represented the Kentucky Junior Historical Society by demonstrating games and helping guest make corn husk dolls! Thanks for all your hard work, Hiner family! 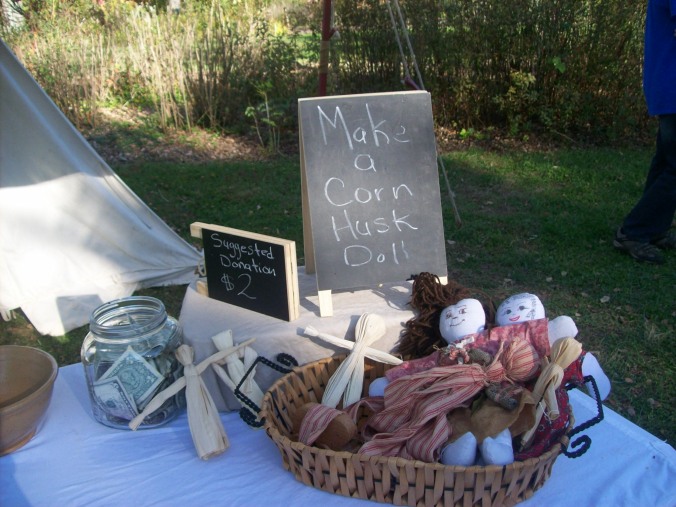 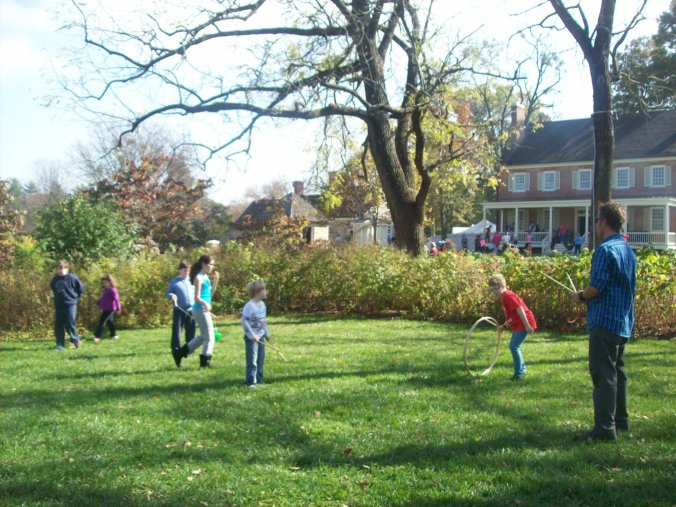 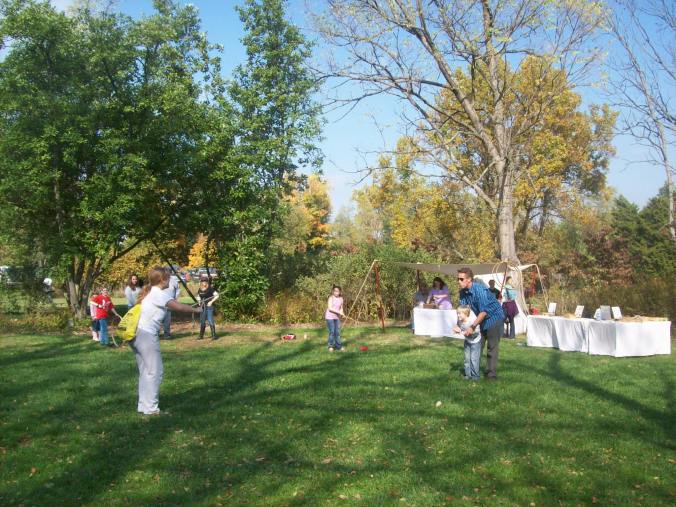 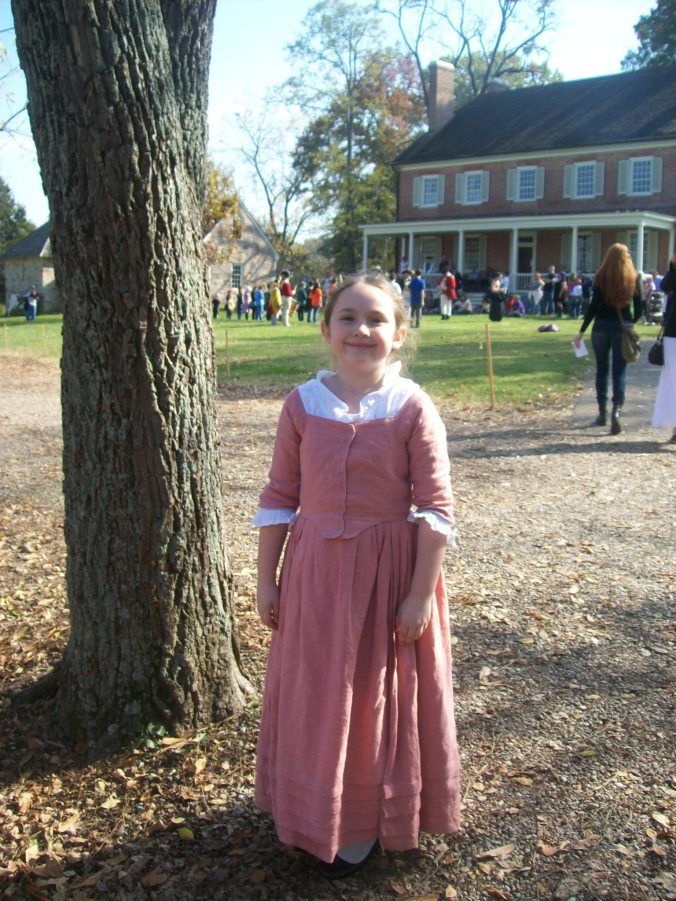 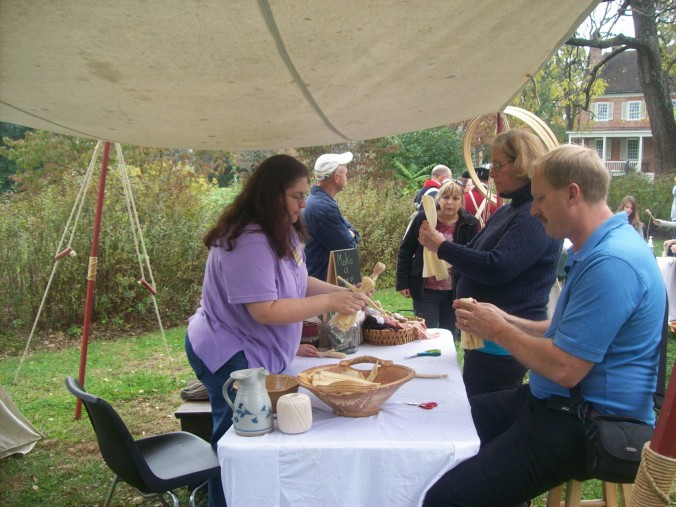 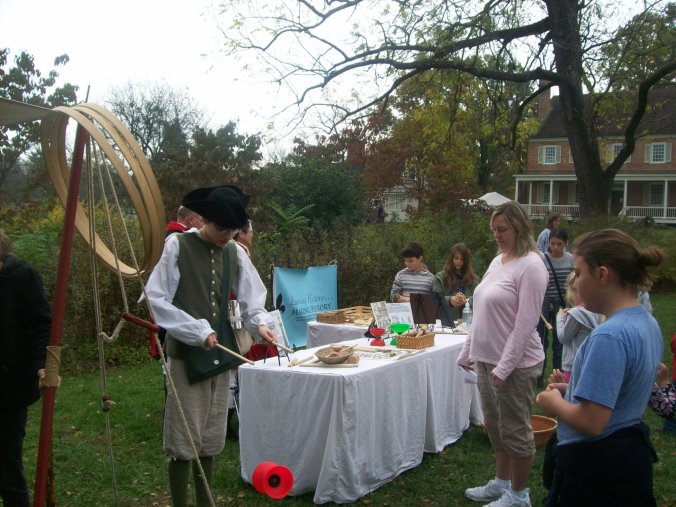 I had so much fun, it’s really surprising I didn’t end up letting the ladies of Turkey Roost outfit me in the latest 18th century fashions! 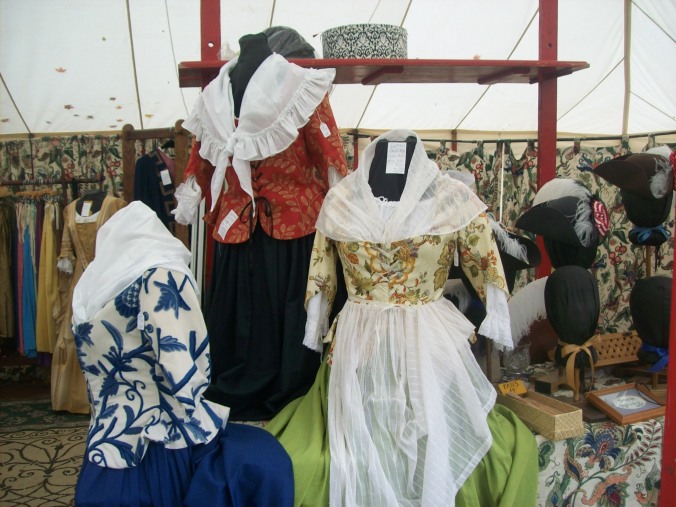 But Nancy didn’t seem to mind I stuck to my blue jeans for the weekend.

Volunteer Jennifer  was on trash duty, but she still took some time to bond with resident rat, Wilson. 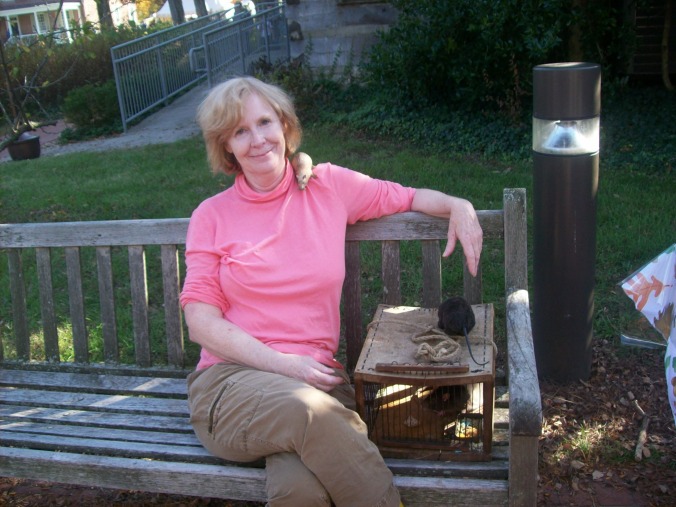 Halloween is just around the corner, and Business Manager Debbie spotted a spooky visitor in the parking lot. 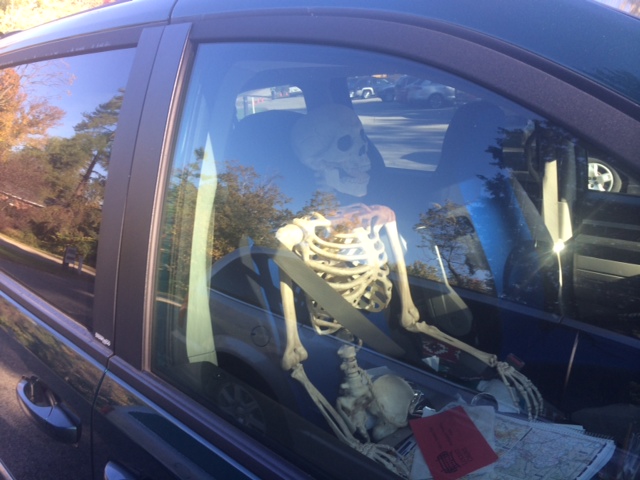 Why did the skeleton go to Market Fair alone?
Because he had no body to go with!

All in all, it was a splendid weekend. If you were at Market Fair this weekend, let us know in the comments! What was your favorite thing? Do you now wish you lived in the 18th century? Will you be back next year? As October winds down, so does a lot of the activity around Locust Grove, but we still have plenty events for the rest of the year. And of course, we’re open every day for tours! We’re always happy to welcome you into our 18th century world!

6 thoughts on “The 18th Century Returns to Locust Grove: A Weekend at Market Fair”