Season’s greetings, everyone! Last week, we got an inside look at the initial process of becoming a Locust Grove costumed interpreter and preparations for Christmastide. Now, the day is upon us–Christmastide is today, December 5 and tomorrow, December 6! More information can be found here, but for now, let’s check in with Brian and the cast to learn more about last-minute preparations! 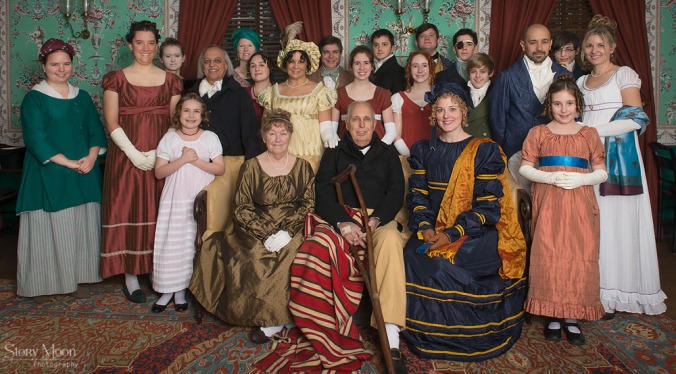 The cast of Christmastide!

According to Brian Cushing, the Locust Grove program coordinator, Christmastide this year “should feel like a party.” Guests will be welcomed through the front door into the year 1816 to find the house all decorated for the holidays, thanks to the hard work of our volunteers. Guests will find whist playing and dancing in the Great Parlor, refreshments in the hearth kitchen, and lively conversation everywhere! In the visitor’s center, Bob Pilkington will captivate audiences with his storytelling, children can make traditional crafts, and everyone can shop for gifts at the book sale or in the museum store. (Remember, everything in the museum store is 20% off through December 7!) Crafting Christmastide has been two years in the making, as Locust Grove went about building a different holiday event than its previous iteration, Candlelight. Focusing on presentation and authenticity, the Locust Grove team used the guiding question “How does a party look 200 years ago and how do you recreate that?” Other museums and events, such as the Dickens Fair in California, provided inspiration for presentation and decoration, but everything else came from the Locust Grove archives and meticulous research by the cast. Brian is most excited about seeing everything come together, and is filled with praise for the Christmastide cast, saying “We have such a proactive talented group of people that I’m looking forward to seeing people become their characters. This takes a special kind of dedication and these people have that.” And what a cast! Twenty-two individuals will be sharing their talent and historical knowledge this year. 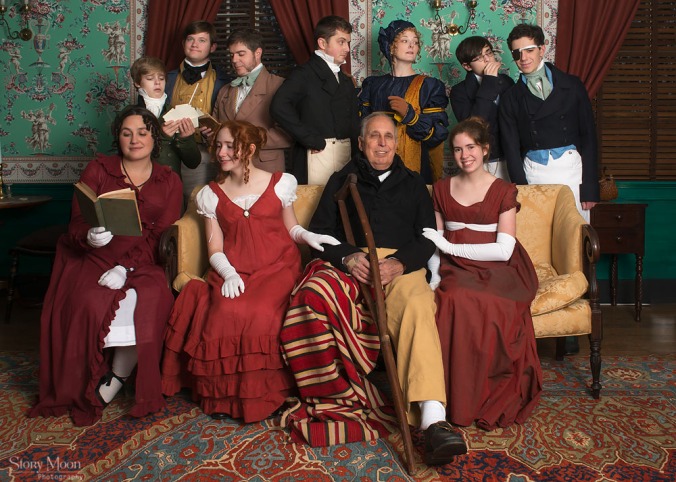 But what can visitors expect when greeting members of the Clark, Croghan, Gwathmey, Bullitt, Taylor, and Cosby families? The cast has been put through their paces with what Brian calls “sensory experiences of daily life”–spending time in the house, playing games, eating food in the kitchen, dancing, and getting to know one another not just in the early 19th century but in the 21st century as well. Everyone is portraying a family member of someone else in the cast, so Christmastide is a sort-of family reunion! To that end, Christmastide is meant to be interactive, living history theater. Instead of being scripted, cast members use their knowledge of their character’s life and the context of 19th century life to respond to one another and to modern guests.  Many of the cast members also make their own costumes, which, according to Amy, “involves many hours of dedicated research.” Heather Hiner, a Locust Grove volunteer who provided all of these lovely photos, was instrumental in teaching historical games to cast members, and Melissa did her best to track down spices used by our ancestors, such as currants and blades of mace to give the food she cooks an authentic flavor. In other exciting news, there are two interpreters playing the same person–we have two Dr. John Croghans this year! Brandon Vigliarolo will be Dr. John in 1816, and will be downstairs in the main house, while Keith Stevenson will be upstairs on the third floor in the doctor’s office in his role as Dr. John in 1842. 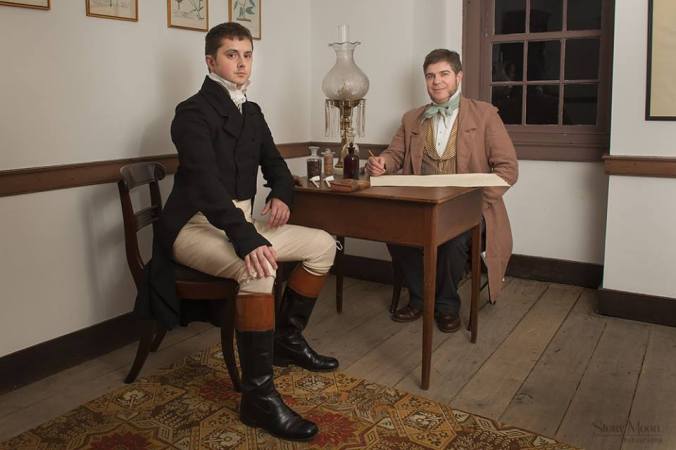 The two Dr. Johns. The resemblance is uncanny.

For many of our cast members, their historical family members may be their real family members in the 21st century. The Hiner, Stevenson, and Bache families are all involved in Christmastide. In fact,  Catherine Bache and her real-life sister Julia portrays historical sisters Eliza and Ann Croghan, while their younger sister takes on the role of Barbara Cosby, daughter of Fortunatus Cosby, the Croghan family lawyer. In turn, Jason Hiner portrays Fortunatus Cosby while his son Noah is Charles Croghan and his daughter Jocelyn is Eloise Bullitt. Jocelyn’s historical mom is Diana Gwathmey Bullitt, played by Kelly Stevenson. Kelly’s husband and son are also in the cast–her son Tom portrays Nicholas Croghan while her husband Keith Stevenson plays Nicholas’ older brother Dr. John Croghan in 1842. Confused yet? It is a little complicated, but it just makes Christmastide more fun! In fact, in the words of Jocelyn, “I’m going to have fun, but mostly it’s about the guests’ experience.” Even our youngest cast member is here to make sure all visitors have fun! 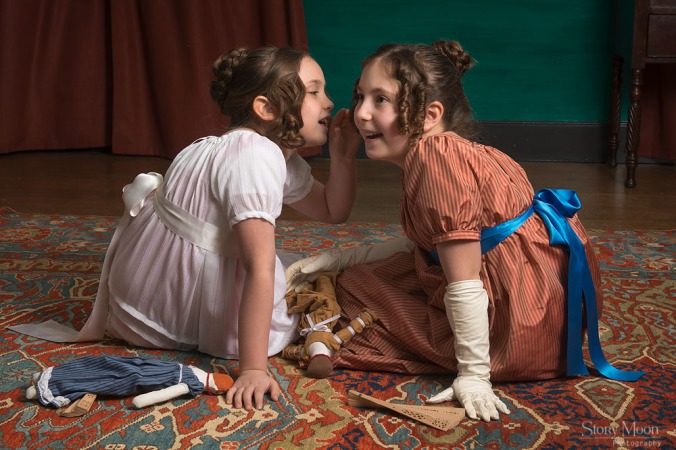 So, why should you come to Christmastide? If you ask Mary Beth, our Curator of Collections and Education, she’ll say “For the cookies! And because it’s one of the only times you can see the house at night.” Brian wants guests “to lose themselves in the joy and cheer of another time.” I don’t think I can put it any better than that. Hope to see you all there!

With much joy and cheer,

All photographs in this post courtesy of Heather Hiner and Story Moon Photography.

One thought on “Home for the Holidays with the Croghans: Part 2”