Christmastide has come and gone, but hopefully everyone who attended left filled with cheer, gingerbread, and the spirit of the season!

Here are some scenes from the event–my pictures are not nearly as wonderful as Heather’s, but I hope you get the effect just the same! 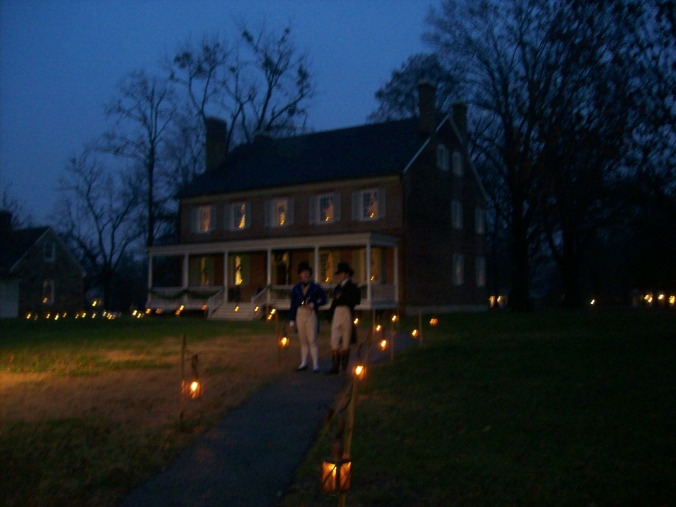 I was greeted on the walk to the house by William Croghan, Jr. and Dr. John Croghan (of 1816). Isn’t the house beautiful all lit up? 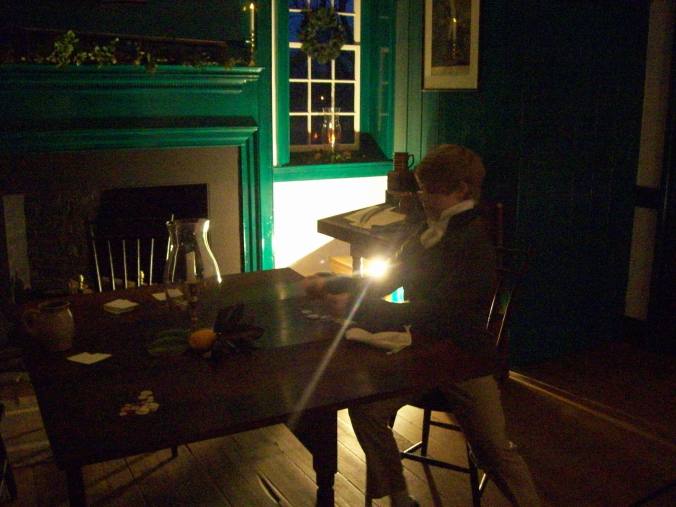 Edmund Croghan, the youngest child, was setting up a game in the Farm Office. 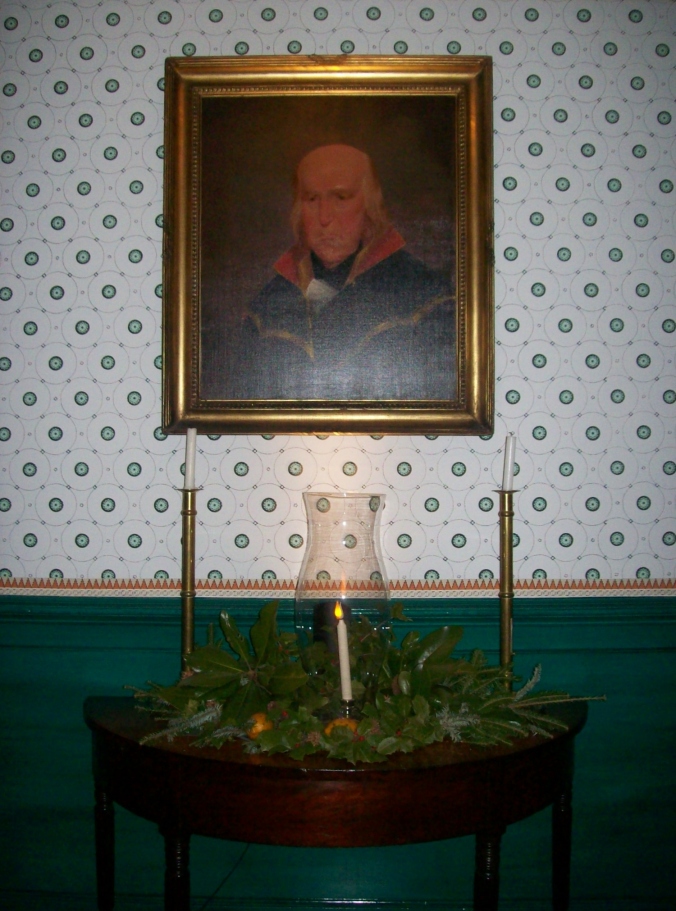 George Rogers Clark’s portrait–painted in the year 1816–looks a little more cheerful all dressed up for the holiday!

In fact, the General himself could be found greeting guests in his apartment just across the hall from his portrait. 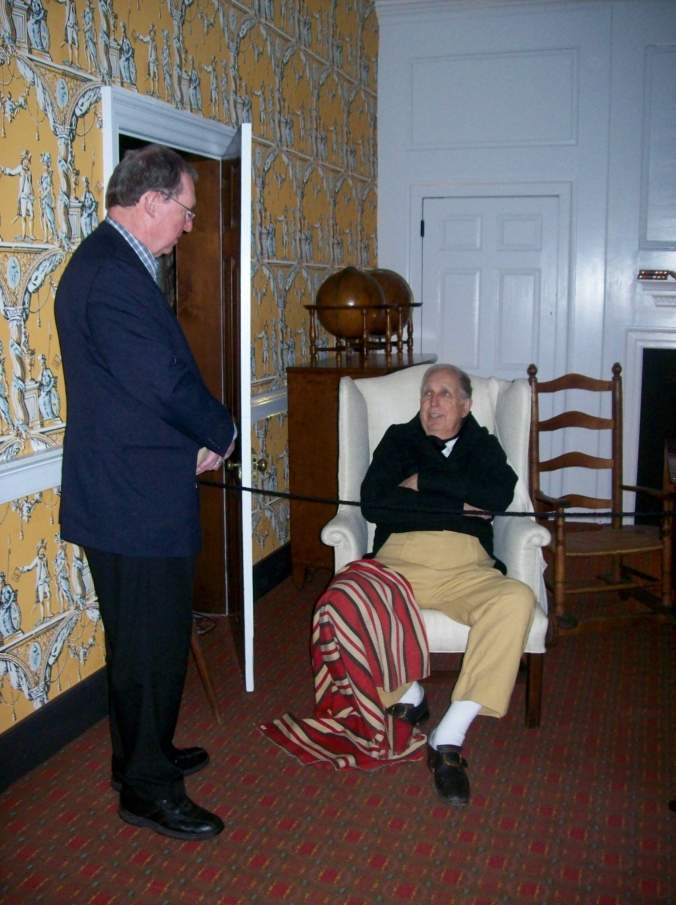 I didn’t overhear their conversation so I like to think GRC was recounting his exploits during the American Revolution!

Friends Eloise Bullitt and Barbara Cosby could be found on the third floor, playing games with guests and enjoying one another’s company. 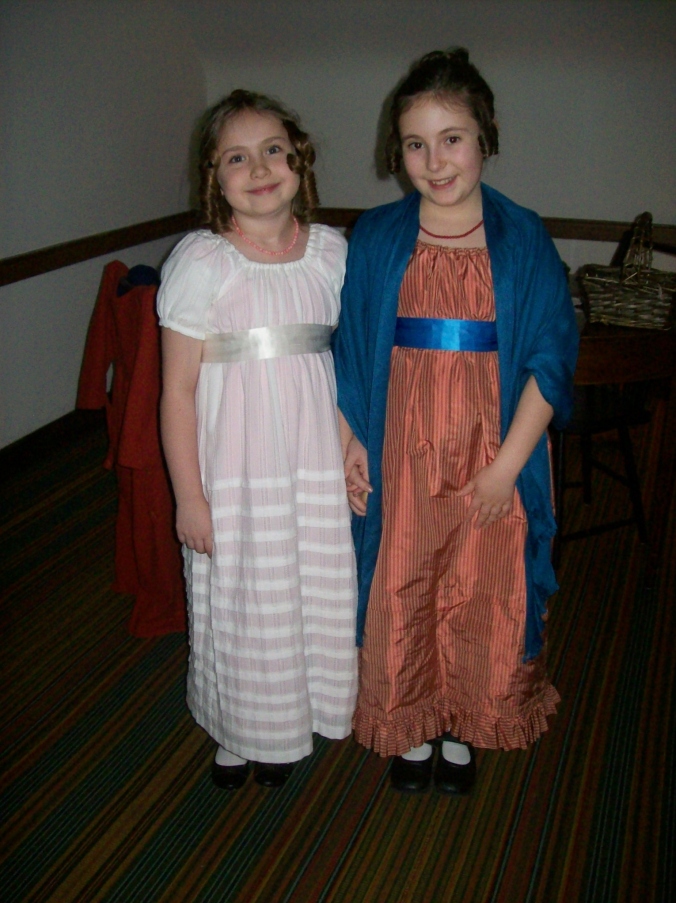 All dressed up for the party!

Charles and Nicholas Croghan were also upstairs, hopefully staying out of mischief! Nicholas informed me that he lost his eye when he was twelve after falling out of a tree, but his older brother, Dr. John, saved it in a glass jar for study! 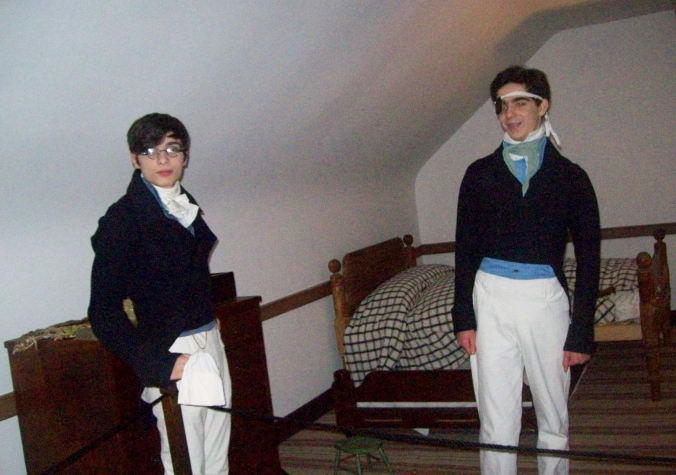 In the next room, I found the future version of Dr. John! 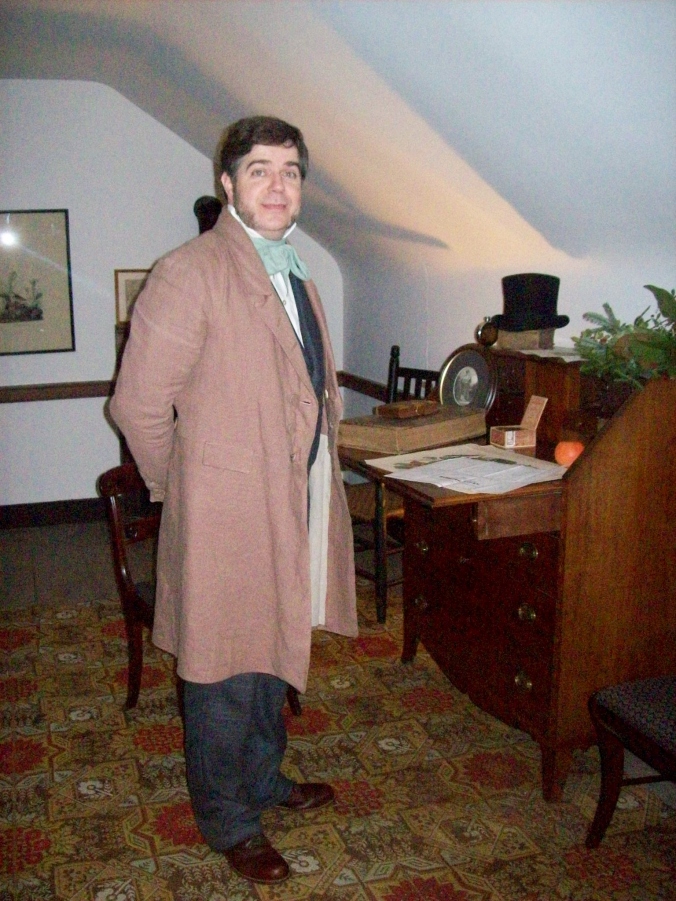 Dr. John Croghan (1842) met patients…I mean visitors…in his office. He studied under Dr. Benjamin Rush, a signer of the Declaration of Independence!

The ladies of the house seemed to be having quite an enjoyable evening. Gales of laughter could be constantly heard from Mrs. Lucy Croghan’s parlor and when I poked my head in, the ladies, including Mrs. Richard Taylor and Mrs. Emelia Clarke, were discussing the scandalous new novel Frankenstein! Certainly not a topic I would think appropriate when a young lady like Miss Eliza Cosby was present! 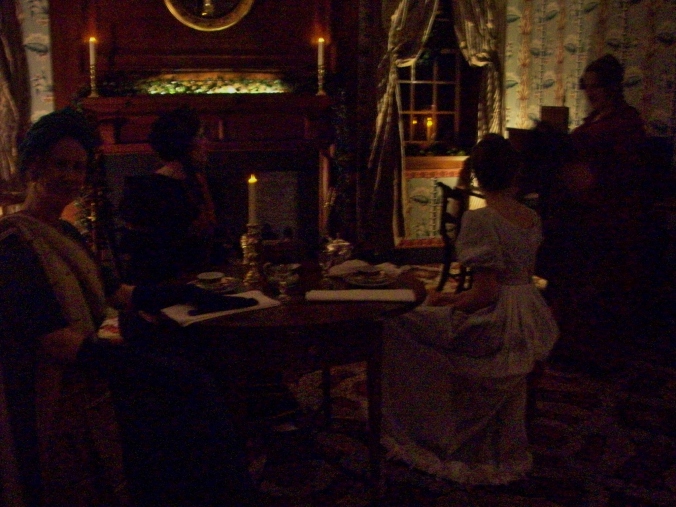 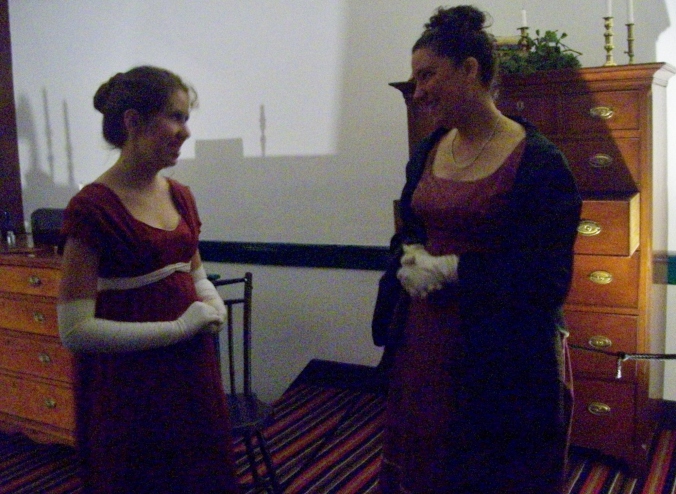 I missed the dancing in the Grand Parlor, but when I arrived, the musicians were preparing for much revelry! 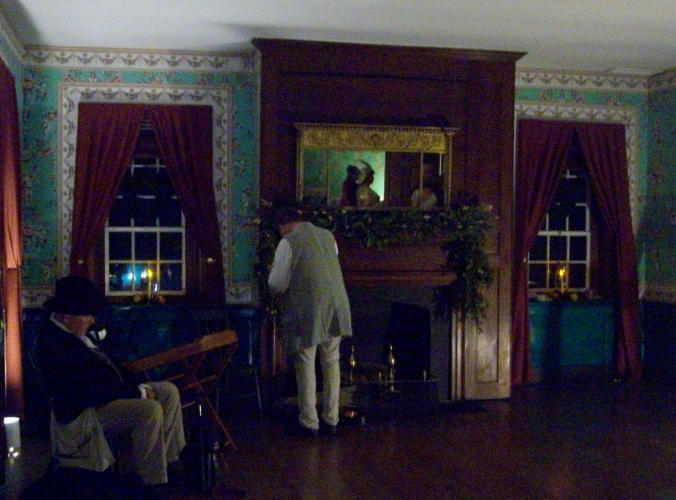 Out in the kitchen, guests were served gingerbread and cider–YUM! 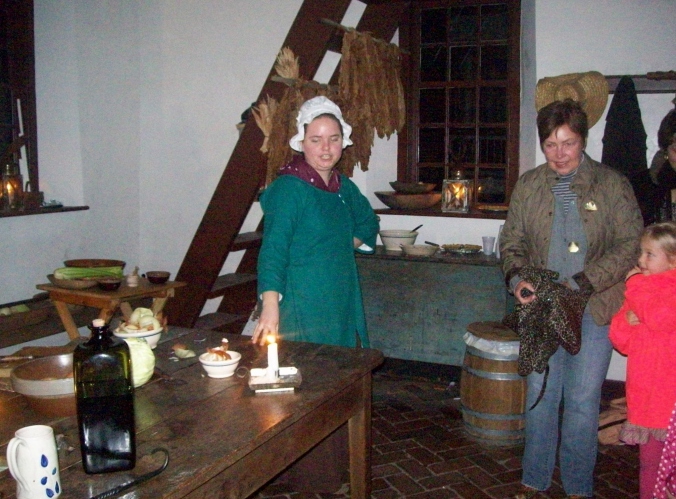 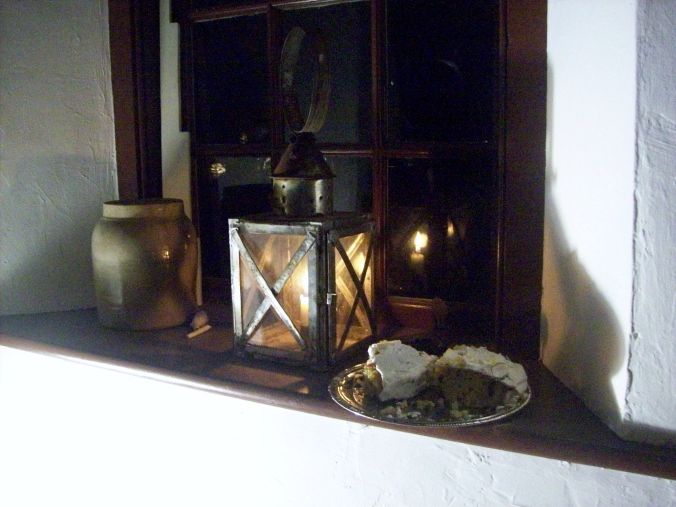 I know I had a wonderful time celebrating the holidays with the Croghans, and I hope you did too! What was your favorite part of Christmastide? And even though the house may not be filled with family, come by and see us this holiday season! We’ll keep a light burning for you! 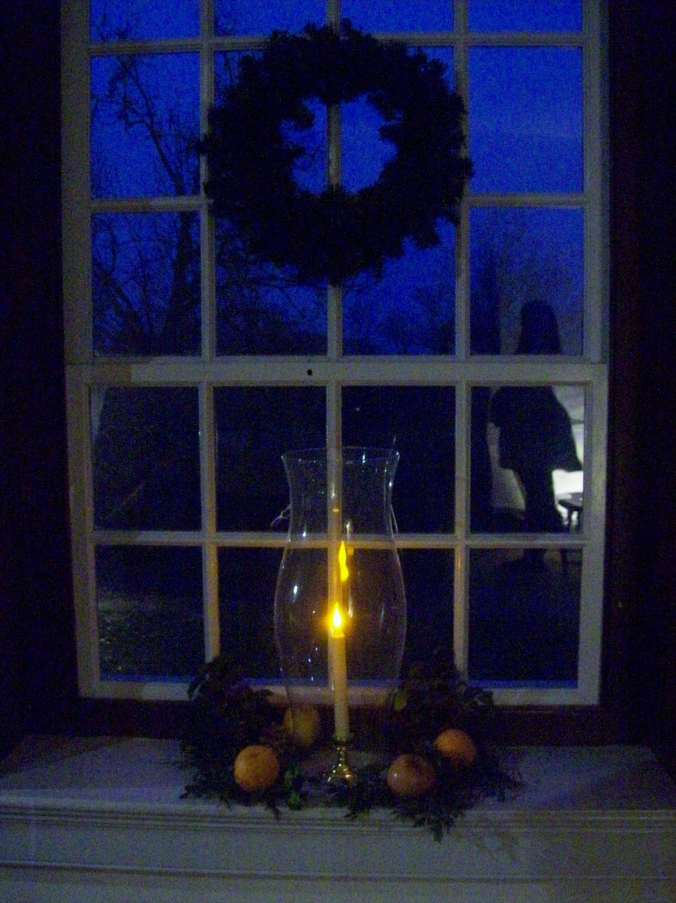 3 thoughts on “Home for the Holidays with the Croghans: Part 3”