Winter always seems to catch up to Kentucky in January, and this past week has been no exception. We’ve had two dazzling snowstorms, which got me thinking about what the Croghan family was doing during past Januarys. Below are two letters written almost two hundred years ago to the day, from William Croghan, Jr. to his brother George, and from Ann Croghan Jesup to her sister, Eliza Croghan Hancock. While neither of these letters were written at Locust Grove, they give plenty of insight into life in the early nineteenth century, as well as the close bond of the Croghan family. Enjoy! George Croghan and William Croghan, Jr. George was three years older than his brother, a lawyer who would inherit Locust Grove in 1822. Both brothers married wealthy women from prominent East Coast families.

Your horses &c are so long comeing, & learning that they will not be fit for service if they come by water for at least a month after their arrival – I have resolved tomorrow to start to Fort Adams[.]  For the Negroes I have purchased six yokes of Oxen, which will answer very well for breaking up the ground, everything now is in readiness & in a week, I shall be hard at work on the plantation.  There are out horses &c sufficient for the negroes, if any more be wanting they must be erected at their leisure.  My Cotton seed I have just been up after, & had taken to the plantation.  The cane given me by Minor, is at his upper plantation which I will take in the boat as I come down.

Major Lee has made a purchase within half a mile of you, for his son, he begins operations immediately.

Why do you not write more frequently?

My Love to Papa Mama, Serena, & the family… Ann Croghan Jesup and Eliza Croghan Hancock. Ann was four years older than Eliza, and lived in Washington, DC, as her husband was Quartermaster General of the US Army. Eliza and her husband George Hancock owned Locust Grove from 1828-1834.

Genl Jesup has gone to Mr. Southards party, and the Children are asleep & all is so quiet about the (town or house) that I think I can write to you without interruption. I would have answered your letter immediately if Lucy Ann had not been sick but I never like to write to you without making sure all are well—she has not been well for more than two weeks. The doctor said it is want of action in her liver” that ails her, she has not been confined to her bed nor had a fever but complained constantly of pain in her bowels & lost her appetite & spirit but today & yesterday the weather was delightful sunshiney and she is much better, she has been very much confined on account of the dreadful weather that now that she begins to take the first (__) she will soon be well—she is very anxious to be well enough by the 26th to go to Miss Ringgolds little party. I have been obliged to amuse her in every way to keep her from fretting—she never tires of our  (__) about Uncle Hancock’s” I am sure I could not tell how many times both Cealy & myself have called over (__) your name, “Now mama tell me about the dear that Uncle gave me” & (__) to make out a long story about “now tell me about Tom’s (__) with (__) Betsy—now about the (__) that Aunt when she was picking blackberries & of May & of Aunt Molly & believe I have tired you out talking so much of Lucy Ann now Marys turn, she is as good humoured as when you saw her & is far prettier. She has as great a passion for “Tories” as she calls stories as her sister. She is the most mischievous creature that ever was. I have to whip her two or three times a day, but while I am whipping her she is planning more mischief & as soon as I have finished at it she goes. She always has a long story to tell her Papa about her Mama whipping her ”but but Mama” & if she does not understand her she gives him a good slap in the face. Little Jane grows finely. She looks very much like her sisters did at her age, her hair is quite black. She has grown (__) five minutes in the night indeed she is no trouble to carry on. I always dress & undress her & that is all the trouble she gives. Mrs. Findley comes to see her almost every day—I have not been and visiting until Friday last for three months. I was out all this morning with Mrs. Findlay and Mrs. [illegible lines]. Mrs. Williams would be at her house this week so I expect when will commence then with her parties. So the other secretaries wives do. I will have a dress made for you with pleasure if you will only say of what you wish it. I would advice a silk, as you say you do not want it before spring. I dare say I could send it to Fotheringay–but if you go as early as April to KY had it not better be sent there. Black watered silks are very much the fashion now—capes—collars & indeed everything one fancies, is work on the neck & I think I can tell the length for your dress; let me know how (__) your waiste is & I can have it made to fit you if you. If you want anything else let me know. When I heard from home all were well— (__) Taylor is still in the City as big a fool as ever not withstanding the PM General is his father in law—Dr. Johnston has been three weeks in the city & was quite a (illegible lines) 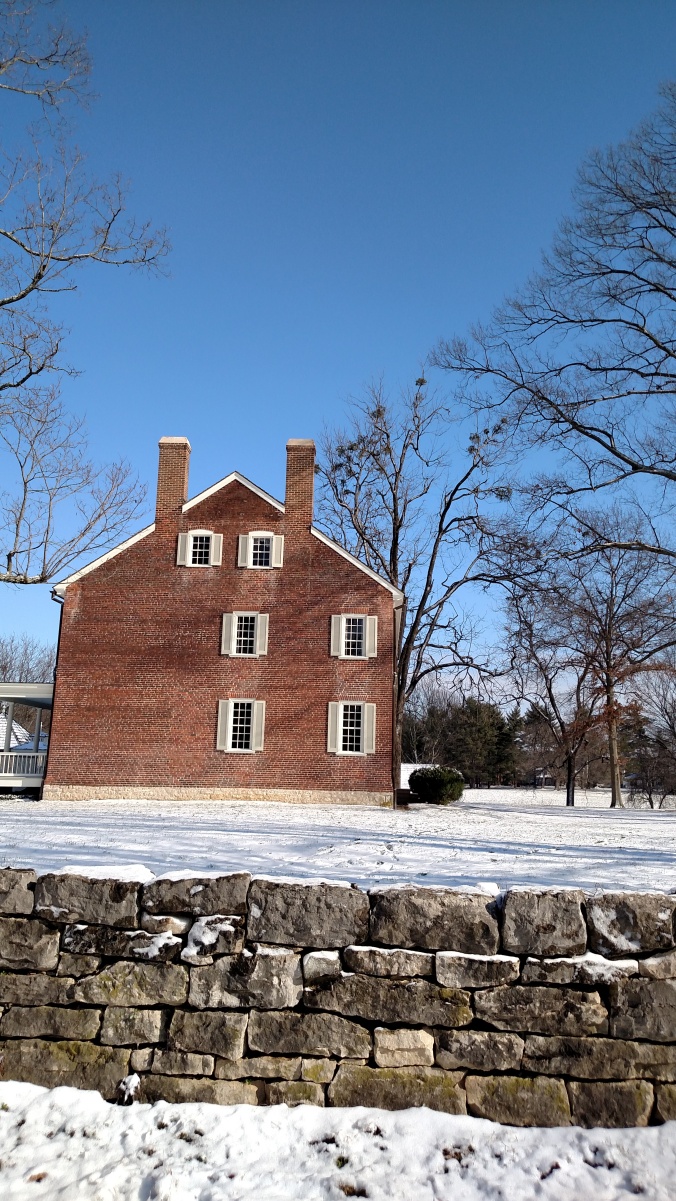 We at Locust Grove think just as fondly of you, our  friends, as the Croghans did of their family, and we look forward to seeing you all when we re-open for 2016 on February 1!