Birthdays are always exciting, especially when you get to double the celebration! On this day, June 19, in 1802, Charles and Nicholas Croghan were born. The Croghan twins were the sixth and seventh children of William and Lucy Croghan, although we aren’t sure which one of them was born first. While Charles and Nicholas may not have had the significant careers and exploits of their siblings, they still had their own adventures and remarkable lives. Let’s celebrate these two members of our family with a look at their lives!

Nicholas and Charles Croghan on the porch of Locust Grove

While we don’t know if the Croghan twins were identical or fraternal, we do know that there was a very simple way of telling Nicholas apart from Charles. Around age five, Nicholas had an accident and lost an eye. His older brother, Dr. John Croghan, wrote of the incident in a letter to his cousin John O’Fallon:

“Locust grove, June 27th 1807
Dear John
… the very unfortunate accident which has befallen my Brother Nicholas, … During this last storm which happened previous to my arrival here a tree was blown down not far distant from my Fathers house, on one of the limbs of which he has ascended, and having fallen from there, he struck his Eye on a stick which stood erect from the ground, which penetrated so deeply that it at once demolished both the Retina and Iris of the Eye. We have the sight of his Eye in a wine glass … I shall therefore terminate by stating that Nicholas is deprived of his sight, Uncle George (who is here at present) appears to be very near in the predicament, and indeed the soar Eyes predominate almost throughout the whole neighborhood. Uncle has been here for some time …
John Croghan. ”

As far as childhood mishaps go, Nicholas certainly wins for most dramatic!

From family letters, it seems that Charles and Nicholas were very close. Heather H., Locust Grove volunteer and researcher extraordinaire, noticed that letters to them at school are often addressed to them both, as though they were considered by their family to be a package deal.  You can read a few of those letters here.  Both brothers attended St. Thomas College, near Springfield, Kentucky. 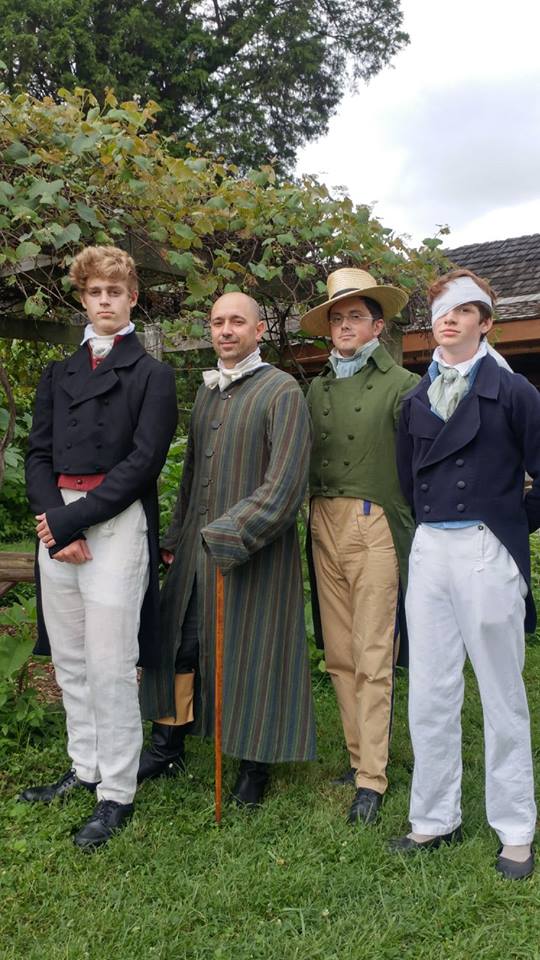 In November 1819, Nicholas wrote an affectionate letter to Maria Preston that shows him as a young man of seventeen, full of plans for the future:

“Sunday November 14th 1819
Great is the pleasure Dear Cousin that I entertain even at the thought of writing to you, you must notice I suppose then how much greater that pleasure when I am only thinking of writing to you, but am actually writing when I have as it were the prize for which I am writing placed before me. What could that prize be, but that of receiving a letter from you . To me the most valuable, Besides when I am writing my heart will beats with joy, caused by the pleasing thought of pleasing you dear and affectionate Cousin, and what could please one Cousin more than that of giving, or the thought of giving another [illegible] The mind of persons are different, and that which is pleasing to one is sometimes distressing to another, I cannot therefore say that it is [illegible] to all, but I can say that to me there are very few things more pleasing […] I always remember with great pleasure the pleasant evening I spent at your Fathers and Uncle Fitzhugh and hope that we will spend many more such the next time I visit Jefferson County […]
I have not as yet found any one of the regular [illegible] in College but I intended joining the juror or next to the last class when I enter it. I had the pleasure of receiving a letter from Brother William on Thursday, but which I found to my great distress that papa had been very unwell but much pleased to hear that since then nearly recovered and I also heard from him that Aunt [illegible] still continued very unwell which indeed gives me much uneasiness.
I have heard a great many lectures during the last two weeks, the most of them on surgery, Natural History, Botany & the best of which I think as delivered Doct. Caldwell on medicine. The most diverting and some think the most [illegible] was delivered by [illegible] a Frenchman on Natural History and Botany.
[…] You must excuse me dear Cousin from writing in so bad a hand for I have written it so fast as I could so that I might have time to get my lessons for tomorrow thinking that I had better do that not to write at all. Brothers desire to be remembered to you.
Remember me to yours & my fathers family and the rest of my friends and relations whom you may have the pleasure of seeing—May happiness forever attend you is the ardent wish of your affectionate Cousin
NICHOLAS CROGHAN.”

The college Nicholas mentions is Transylvania University, and it seems he wanted to study medicine, like his older brother John. Nicholas was also one of the first Croghans to visit Mammoth Cave, in May 1825. He left his signature in candlesmoke in Gothic Avenue, a common practice for 19th-century visitors.

It seems that the twins were never in good health. Nicholas was at Green River and Mammoth Cave in May 1825, but by July had returned to Locust Grove, where he died on July 11, 1825. Heather H. managed to locate a copy of his obituary, which reads “At Locust Grove, near Louisville on Monday evening, the 11th instant, in the 23rd year of his age, NICHOLAS CROGHAN Esq. after an illness of seven days […] His gentleness of manners, and urbanity of address, won the admiration and regard of his acquaintances; while the tenderness of his filial and paternal feelings endeared him to the hearts of his family […] To use his dying words–nil conscire sibi nihil limit– and thus his soul escaped to eternity.”

Volunteer John V. has translated “Nil conscire sibi nihil limit” to mean  “To be aware of nothing about himself–himself–without restrictions” or “No regrets.” Understandably, Charles was distraught at the death of his twin, as John wrote in August 1825, “Poor Charles he has lost one who alone seemed to attach to him to life […] his shattered constitution cannot support the recollection of all he has lost. ”

Charles himself was not in good health for the rest of his life. From letters and other family papers, it seems possible he suffered from tuberculosis or another lung ailment. He traveled a great deal for his health, spending time in Florida and New Orleans. The following letter in 1828 to his elder brother William Croghan Jr. details his health issues:

“Locust grove September 21st [1828]
Dear Brother,
About two weeks ago, I returned home with my health much improved – since I have not been very well. There is now and has been this summer a great deal of sickness on the place. Since my return there have been 5 or 6 new cases of bilious fevers […]
I am trying to make arrangements to spend the ensuing winter in Florida; if I could get any time next month the money which will be due the first of January, I will have it in my power to go. To go there I disposed of my property in Indiana – got for it enough to answer me – 800 dollars, all of which was borrowed by the Genļ and Mr. Hancock […] On yesterday I had a slight agu[e], and, have now a fever, which I expect will leave me soon as it is not high […] If you come down this fall, can’t you bring Mary with you: We are all very anxious to see her. Remember me to Mrs. O’Hara, to Mr. and Mrs. Den, and believe me to be your affectionate brother
Charles.”

His brother John took special interest regarding his health, writing in 1831 “Charles’s health is, I think, gradually improving. Dr. Physick says “there is nothing objectionable to his going to Europe”, but Charles is determined not to risque a sea voyage without the Doctor recommends it as being essential to his recovery.” In 1832, the brothers traveled together to Europe as Charles’ health worsened, and John devoted himself to his brother’s care during this period. It was John who delivered the news of Charles’ death in Paris on October 21, 1832  at age 28 to his family through General Thomas Jesup:

“27th October 1832
Paris, France
…my painful duty to announce to you the death of our beloved Charles. He died on the night of the 21st and was interred in the cemetery of Pere La Chaise on the 23d. …attentions both medical and otherwise were shown him while living and his corpse was followed to the grave by nearly all of the Americans of this city. The most distinguished medical gentlemen attended him while here and they declare that his case has for a long time been utterly incurable. He died apparently without the slightest pain and in the perfect possession of his facilities. …Anxious as I am to return to the U. States… [not] until April. The delicate state of my health arising from the [illegible] duties which I have had so long to perform, requires that I should visit a temperate climate. I shall in obedience to the advice of medical gentlemen spend the ensuing winter in the south of France or Italy. Neither the affairs of poor Charles nor the interest of my family render it necessary to return before Spring. …
[John Croghan].”

As the letter notes, Charles was buried in Pere Lachaise Cemetery in Paris, and his remains are still interred there.

Compared to some members of the Croghan family, we don’t know much about Charles and Nicholas. Although we can read their letters, there are no extant portraits of either twin. It’s important, however, to mark the occasion of their birth as their family might have, as they were young men with dreams and ambitions who traveled widely and contributed to their family and society despite any issues of health. So Happy Birthday, Charles and Nicholas! We raise a glass to you!